On Wednesday, May 29th, 2019 we made a stop in our great state capital to talk to collect stories from state legislators. This stop marked the halfway point of our tour around the state. We were stationed in the South Lobby of the Capitol building in Hartford across from a plaque that read, “In Memory Of Our Heroic Fathers, Erected By The Daughters Of Union Veterans Of The Civil War”.

As the day progressed and the halls of the capitol became more populated, we saw the likes of State representatives Chris Rosario, Jack Hennessy, John Fusco, Andre Baker, Charles Stallworth, Pat Wilson Pheanious, and Channel 3 WFSB reporter Susan Raff. We also had firefighters of local 760 unions in Hartford participate and were more than happy to pose for a picture with our Dear Dad Tour signs.

One interesting thing we’ve noticed thus far is how participants exceed the minimum 30-45 seconds we usually ask them to speak for. We do tell everyone that there isn’t a time limit though. What we’ve found is that when someone is willing to tell their father story, they usually have a lot to say. This is more than welcomed and shows just how important fatherhood is! We would like to personally thank everyone involved in this process and for sharing their stories.

To date, this has been the most emotional day with stories that made some participant’s teary-eyed. “These emotions are sometimes suppressed, a lot of people typically don’t talk about dads so when they do, it is very emotional,” said Anthony Judkins.

The tour hits the street of Norwich 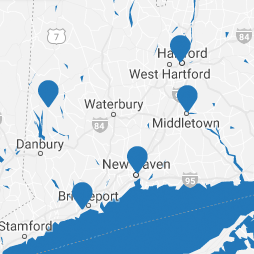 Find out where our booth will be next!

The tour hits the street of Norwich